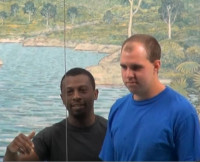 Let it be known that, on the 12th day of April 2015, Corey Wilkinson, Became a believer in Jesus as his Lord and Savior (John 3:16). Confessed his faith in Jesus as the Christ, the son of the living God (Romans 10:9-10) and submitted to the command to be baptized (Mark16:16). Corey confession was witnessed by all those present and he was buried with Christ in baptism administered by his minister, Za Farley, and was raised to walk a new life in Christ Jesus (Romans 6:3-14)